A quick note ...
I'm reading the book, "The Long Walk," by Brian Castner.
The subject is duty with EOD in Iraq.
Came across this exchange a few chapters in:
"Come on Captain, lets go," said Ewbank. "There ain't shit here to find. And anyway, we got another call. They found a car bomb that didn't go off. Let's di di mau."

("di di mau"  - Vietnamese for "Let's go, quickly!"
Seems a small bit of vocabulary from my war has survived into modern usage.)

Good writing. Drew me in immediately.
He's good at relating all the mundane.
Remember, God lives in the details;
it's the ordinary that breathes life into
any tale being told."

Time for some Photoshop artwork ... 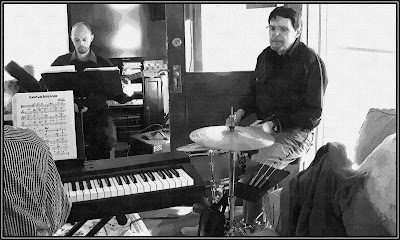 Me, at the New Fairfield, CT Car Show, with The Midnight Blues 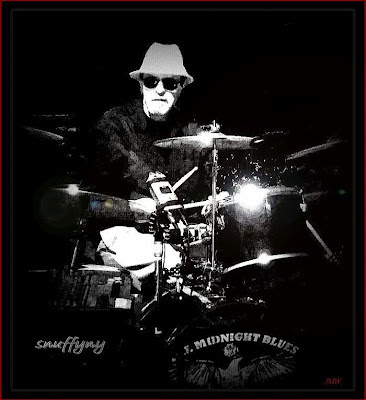 At The Sherman Fest, Sherman, CT with The Midnight Blues 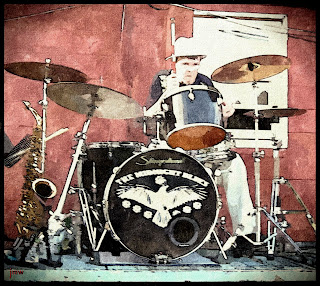 At a Wappingers Falls Dance Social, with The Dukes & Dutchess 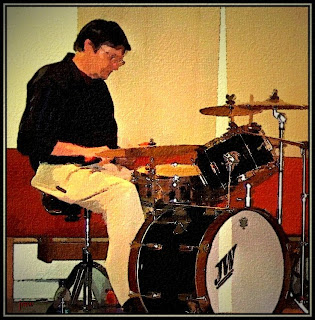 Posted by snuffyny at 9:48 PM No comments:

Now there are talking heads on the TV.
We really don't need the politicians to tell
us how we should feel.

The shooter, one James Holmes, seems
to have been a brilliant, hard working grad
student. Some how, some when, his brain went
off kilter ... he became delusional ... wanted to be
The Joker.

Here's a photo purporting to show Holmes being taken away
by police during the Occupy San Diego protest. 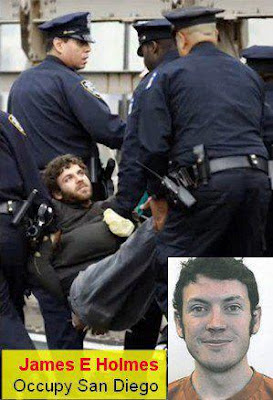 (Apparently he's not from the Tea Party side of town.)

On an entirely different note ...
there was a hummingbird flitting about on the rear deck
this afternoon. I do believe that this is the first time I've
ever seen one at this time of year. Normally, one will
visit in September, when the coleus plants finally bloom.
I may begin putting out feeders now ... see if I can
attract others to visit.

-Fini
Posted by snuffyny at 1:54 PM No comments:

Middle of July ...
and another 90 degree day ...
a start to another heat wave.
More inside-the-house chores to do.
Was out earlier ... plants all doing well.
To date, no squirrels in the flower boxes.

Posted by snuffyny at 1:39 PM No comments:

From around here ...
Been out in the yard, looking at things.
The plants all seem to be doing well,
although there are many broken branches
high up in the surrounding trees (some of them
quite large) ... souvenirs of past storms and snow falls.
There seems to be a bumper-crop of squirrels
this summer ... there are even two black ones.
I'm surprised that they survived this long, given
the number of hawks living in the neighborhood.
The black squirrel has a silhouette that is easy to
pick out against the green background of a mown lawn.

-Fini
Posted by snuffyny at 1:26 PM No comments:

No sizzle ...
The promised life-threatening heat never made it here.
It reached 90 degrees at about 1:00 PM ... but after that
the clouds moved in and rain began to fall. Right now it's
80 degrees and muggy.
That's it.

-Fini
Posted by snuffyny at 3:39 PM No comments:

Thought to write about some subject today.
Actually had some firm ideas ... began composing
sentences in my head. Became distracted for a
moment and the subject was completely forgotten.
Gone from my head!
Old age??
Or a natural happenstance?

Dunno.
I'm done for the day though.
G'night.

Posted by snuffyny at 4:57 PM No comments: 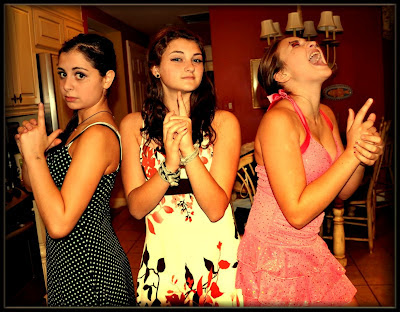 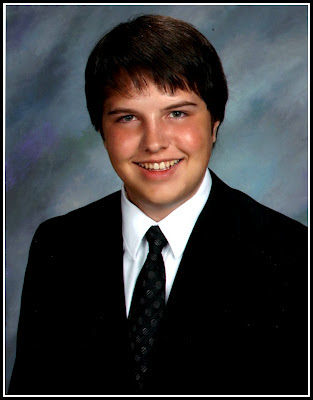 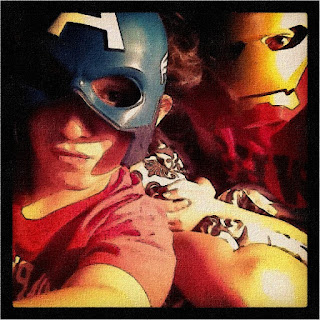 On reading ...
When I read a novel, I like to immerse myself in the story ... live the adventure being lived by the characters in the book. That's why I'm overly picky about what I read. Right now, I'm trying to get through a military techno-thriller. It's failing a basic requirement, however. If an author wants me to believe the fantastic scenarios being concocted in the story-line ... then the author had better get all the mundane actual and technical details down pat. The book I'm currently trying to read deals with some highly evolved science ... but the author writes the statement "The golf cart's electric engine made a whining noise.. " From what I remember from basic science lessons ... engines are combustion-powered, while motors are operated via electrical power ... either AC or DC.  Nit-picky, I know. But if you're gonna talk the talk ... you'd better have walked the walk (or, at least, looked it up!). It's the same (especially) with the military novels. I've come across many where the author seems to have gotten all his military knowledge at the Army-Navy surplus store. What's the old axiom ... "Write what you know."
Please do.

Olive Street ...
I've been a member of Ancestry dot com for the past ...... maybe 2 years. I've managed to trace my various family lines back about 4 generations ... with the one exception being my estranged father's family. Ironically, through his line (the Coopers), I've gone as far back as the American Revolution (although that trace becomes questionable at about the time of the Revolution). I've, now, pretty much run out of family connections. To look back further in time would require spending several hundred dollars for expansion into European records. I'm just not that interested.

Enter Google ... through census records, I found out that my maternal grandmother grew up on Olive Street in Philadelphia. She was ten years old when the family moved there. I entered the address on Google Maps and found the location in central Philadelphia. I switched to the "Street View" and suddenly I'm moving up the block where my grandmother played. Row houses ... 3 stories, brick faced, narrow. Some structures now gone, giving the block a gap-toothed look. Where my grandmother's house had stood was one of those gaps. It's now a family garden plot, surrounded by chain-link.
Still ... it was something to see ... something that I never before knew of.

My grandmother married young ... to Clarence Meyers.
My mother was born in 1928, my grandmother was 18 years old. The marriage didn't last. There was a bitter divorce and my mother was not permitted to visit with her father again (although she did ... but that's a story for another day). That portion of their lives was never spoken of ... at least in front of me. 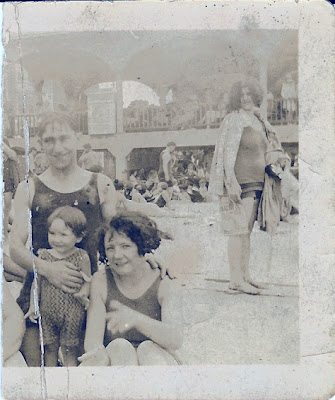 My mother, Kathleen Welsh (on left) with my
grandmother, Josephine Sabin - ca. 1958 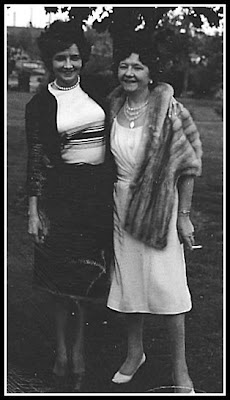 ca. 1991 - Josephine Sabin (on right) with her sister, Catherine Grear.
My grandmother would die the following year, at age 82. My great-aunt
would follow her four years later, dying at age 97. 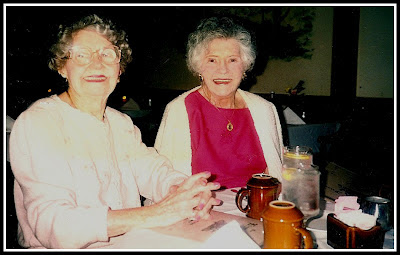 PS: My mother did some basic research and found out that her father, Clarence, had served in the U.S. Army during WWII and was buried in the Veterans Cemetery in Beverly, NJ. She also discovered that, like me, she had half-siblings that she'd never met.

Posted by snuffyny at 9:49 PM No comments: