Thought to write something about 9/11...
but nothing extraordinary happened to me that day.
I was merely a witness from afar.
I watched events unfold on TV, alone at home,
switching from channel to channel.
The first word I heard of the attack came from
the Channel 4 News Chopper... during a traffic
report there was a sudden, fast-moving, shadow
outside the chopper's window and the woman
reporter yelled, "What was that?"
Everything else followed..

Afterthoughts...
In that time just before sleep comes, the mind wanders where it will...
tonight I recalled one, nearly forgotten, 9/11 memory:

I live in the NY City area. Soon after events unfolded at the WTC, one of the local NY channels ran a short news story about Pakistani residents in (one or more ?) New Jersey towns dancing and singing in the streets in celebration of what had just occurred. It was only the one broadcast... and it was NEVER mentioned again.
I've often wondered if the media was self-censoring or if the govt. had intervened to prevent rioting by the rest of us (U.S. citizens). I do know that I've had a hard time looking at Pakistan (and things Pakistani) with anything approaching charity in my heart since.
Posted by snuffyny at 4:57 PM No comments:

Art...
Naomi, the singer in my new band, is also an art teacher.
After practice one day, we got to talking about art and poetry.
Since I dabble in both, she asked to see some of my work.
I showed her some copies of my digital art work and the first
thing she said was, "When are you going to have a showing?"
She thinks the work is that good.
I'm not so sure.

I'm going to link to a couple of pictures and ask what readers think:

China_01 - I scanned this page from a book, then manipulated it with PhotoShop.

China_02 - My first manipulation of the book page... into a framed silk wall hanging.

China_04  - Thirdly... turned the first manipulation into a framed egg-shape.

Any questions or critiques?

PS:
These all began life as Windows desktop wallpapers, originally produced in the .bmp format.
Posted by snuffyny at 8:19 PM No comments:

Back in 2007, at the urging of my grandchildren, we built a tree fort back in the wood lot
at the rear of the property. The kids played in it every time they were here that summer.
However, as years pass, the fort is used less and less frequently. This past summer, they
showed no interest in it at all. (They're mostly teenagers now and their heads are filled
with other thoughts.)


The tree-fort, with three of the grandkids 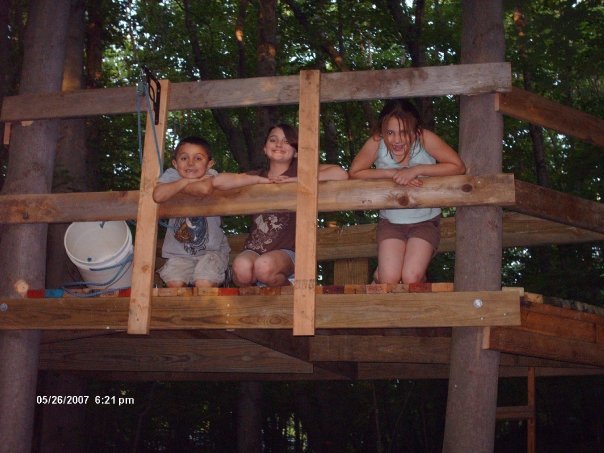 This last Saturday, I spied two young boys up in the tree fort but before I could open the door, they'd climbed down and disappeared into the woods.
Later that day, as the wife and I were leaving to go to the store, we saw that they'd returned and were hammering away at the fort's railings. We asked them to come down, inquired as to their names and where they lived, got answers, asked what were they hammering on. "We were fixin' it. The nails are loose." was the reply. (They'd brought a tool box with them!) Feeling like a turd, I informed them that the fort was off-limits to them... safety and insurance matters.
I really feel bad about this. I like kids and would gladly let them play if I didn't think that I'd be sued if one of them fell and was hurt.
Life in these times.

Apropos of nothing. . .
Caught an ad on TV for Simon Cowell's new show, "The X Factor."
Looked to me like an "American Idol" carbon copy.
I mean... amateurs singing, plus the comedy relief of all the awful wannabes.
Cowell, Paula Abdul and a Randy Jackson clone as judges.
A host (?).

This is "Star Search" run amok.
(Just when does a programming niche become overly saturated?)

After Irene. . .
A week has passed. The storm is long gone. Some effects yet linger.
Looking out on my back yard, all is tranquil. The squirrels are nosing
around for food. The lone gopher made an appearance, crossing the
yard to the next-door neighbor's property. Birds are back. . . to include
the raucous crows. There is little damage. . . a couple of fallen trees
(one a 60 ft. giant) back in the small wood at the rear of the property.
We lost power for a few days. Spent one night in a Fishkill hotel. . .
(were in need of hot showers, food that wasn't canned, lights!).
All-in-all, we fared well compared to others in the storm path.
We were merely inconvenienced.
We were lucky.

I wish everyone else, touched by Irene, a speedy recovery.