War Story ...
Not an ASA story ...
rather, an Army story.
It was 1969 and I was on my way to Japan.
Had taken the United "Red Eye" out of Philadelphia and arrived at the Oakland Army Terminal sometime in the AM. First thing I noticed was the number of soldiers there who were already wearing jungle fatigues ... all of whom were bound for Vietnam. Apparently, there were no more departures while wearing khakis, with issue of jungle-wear in-country, as had been the case back in '67. Me ... bound for Japan, I was stuck wearing my class-A's ... MACV patch on right shoulder.
Was assigned to a waiting area in a large hanger space. Bunks were stacked 3 high, The place was jammed, full of soldiers waiting to be called for boarding. It was like a scene from "The Longest Day." There were card games, smokers, coffee swilling, secret small airline bottles of booze ... noise, there was noise, the constant chatter and hum of voices echoing everywhere. As an SP4, amid a thousand privates, I pretty much had my pick of bunks and chose a bottom rack. Duffel bag locked to bed frame, class-A blouse draped over the duffel, I loosened my tie and lay down on the bare mattress, took a nap. It had
been a long trip. After a couple of hours, I awoke and went in search of coffee. Noticed that I'd picked up a tail ... a young PV2, dressed in jungle fatigues. When I settled down with coffee and a cigarette, he approached and started in with questions. He'd seen the MACV patch, knew I'd been there, wanted to know what to expect. He was 11B20, I'd been 98C20 ... two different worlds. What could I tell him, except that it's hot there and be sure to drink plenty of water. He was scared.  He was a draftee.  I felt for him. For that night, and into the next day, he dogged my every step, asking questions. He didn't seem to understand that different people, with different MOS's, fought different wars over there. To him, it all seemed one big jungle war, "Guadalcanal" again. I was finally called for a civilian flight to Japan. Left the young private behind. Through the intervening years, I've often wondered what became of him.

Did he survive his tour?

I certainly hope so.


PS:
The civilian flight was a Pan Am 707, San Francisco to Tokyo, via Anchorage. The in-flight movie shown was "Hell In The Pacific," a WWII tale, starring Lee Marvin and Toshiro Mifune. There were maybe 12 of us U.S. Army types on board a plane carrying a couple hundred Japanese and we're watching WWII being fought all over again. We'd all had a few drinks by the time they started the movie. When the film reached the part where Lee Marvin's USMC character pisses on the Japanese naval officer, we Americans all clapped and cheered. Cabin was pretty much quiet after that.

Before I forget ...
another War Story. 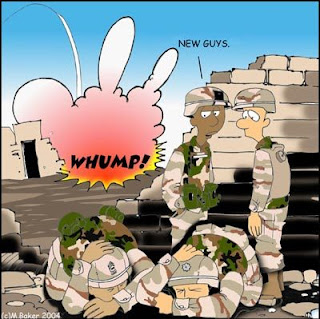 This cartoon may be from the current conflict but back in Vietnam, at the 8th RRFS, Phu Bai, this actually happened.
It was the tail-end of the '68 Tet Offensive. The NVA was mostly beaten but there was a persistent VC mortar crew who would hit us with 5 - 6 rounds, maybe once or twice a week. It was ALWAYS 5 - 6 rounds, then they'd have to di-di because of counter-battery fire. This one afternoon they dropped rounds on us again. The siren sounded and the barracks quickly emptied out. There were guys in towels, having come straight from the shower, guys half dressed, dragging their field gear behind them, guys in full TA-50 and uniform. This was normal. After about 30 minutes, myself and another SP4 (Can't remember his name.) were standing in the trench line adjacent to Star Bunker #3, waiting for the all-clear to sound. Both of us were shirtless, wearing trousers, flip-flops, flak jackets and TA-50 gear. Our helmets rested on the trench edge, our weapons were slung. Around a bend in the trenchline came a frog-hopping  Lieutenant Colonel. We'd never seen him before. He frog-walked to where we were standing, looked up at us through a pair of those black GI issue glasses, and demanded to know what it was we were doing, just standing there. Where was our duty station?  Where were our proper uniforms?? Why weren't we paying attention to the perimeter wire??? ... and on and on. We looked at each other, then down at him (Trying hard not to laugh.), as he squatted there. I explained that the attack was over and we were waiting for the official "all clear" to sound. I further explained that we'd hurried to the bunker quickly, that there had been no time to get properly dressed, there never was and that this was the norm for daytime alerts. He nodded at us, saying, "Oh ... okay." He then allowed that he'd let our appearance pass but we were to be in the proper uniform next time the alert was sounded. He then frog-hopped away, down the trench line towards the bunker.

Turned out he was a nug, TDY from the 509th RRG, down in Saigon. I'd guess that it was his first time being shot at. He was gone, back to Saigon, within the week. Never did find out who he was or why he was there.

-Fini
Posted by snuffyny at 2:28 PM No comments:

From another time ...
September of 1986 ...
I was working for the USAF at Tempelhof Central Airport
in Berlin, Germany as a LN civilian.
I was a computer operator assigned to the 1946th Information
Systems Squadron (formerly the 1946th Comm Squadron).
The editor of the base newspaper, The Tabulator, approached
me about writing a short op-ed piece for the upcoming POW/MIA
Day issue. She asked me because I was the only Vietnam vet that
she knew personally. I agreed. Over the next couple of days, I wrote
and edited, wrote and edited, wrote ...

And this is how the final product turned out:
(Click to enlarge.) 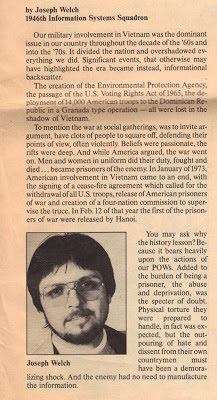 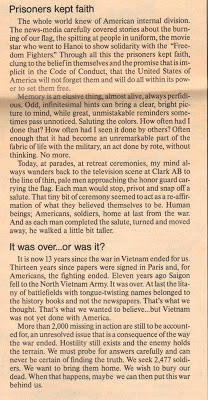 PS: They misspelled my name ... but everybody did. Still happens today.

Posted by snuffyny at 3:29 AM No comments:

Another war story ...
From the ASA Chronicles:
A memory surfaces ...
The 8th RRFS, Phu Bai, Vietnam, ca. 1967 ...
me, pulling LN Guard ... assigned to watch a couple of local PA&E plumbers do work in the HQ Company latrine. (The old French-style buildings.) The plumbers had dug up a drainage pipe near the entrance. I was standing in the doorway watching. MPs were up and showering, getting ready for swings. House-boys and house-girls were working away, cleaning and doing laundry.
One MP (name unknown) had just exited the shower and was standing at the wash basins, getting ready to shave ... in the buff. He was big, 6'3" maybe, red-haired, lots of freckles. The facilities had been built to accomodate a much shorter folk than we Americans. The red-headed MP's "equipment" was lying in the sink as he shaved. Moving down the line of basins was a young, pretty house-girl. She was intent on her job of cleaning the sinks and completely ignored the naked men surrounding her. When she reached the sink being "occupied" by our MP, she merely picked up his "equipment", wiped the sink beneath, then dropped it back in place and, walking around him, continued on with her job, unfazed. I'd seen what was coming and was watching the MP for his reaction. Thought he'd cut his throat the way he jumped. He'd had no idea she was there.
I laughed 'til I almost peed my pants.

Been a long time now ...
a lot has happened.
I'll catch everyone up as time goes on.
No time right now. 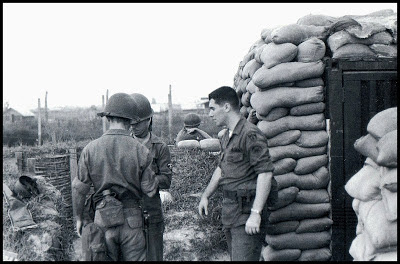 In the above photo, from the 8th RRFS in Vietnam, the fellow with his back to the camera is Willie. Willie was a T.A. guy. Willie was of short stature. He roomed with one Riley, who was of very large stature. Together, they'd often get drunk ... then play a game. Willie'd go stand on a chair in the hallway and shout insults at passers-by. When anyone became pissed enough and attempted to correct Willie's attitude, Riley'd come thundering through the door yelling that he'd "kick the ass of anyone who laid a finger on his little buddy!"  When the insulted party fled, they both would break down in laughter and start in with this game again. Kept them amused. We might complain but Riley'd just threaten to kick our ass too. He was intimidating. Nice guy when sober but a complete Mr. Hyde when drunk. This one time, night into day, Willie was really hammered. Someone finally had enough and called the MPs. When they showed up, Willie took off ... doing the E&E thing. He climbed up an antenna tower and hung there, yelling insults at the MPs. Two MPs were ordered to climb up and bring him down. Willie took this opportunity to pull down his trousers and take a dump on one poor MP's head. (Thus making actual fact of that old army saying, "Been shot at and missed, shit at and hit")  Satisfied with his marksmanship, Willie pulled up his trousers and climbed down to be hauled away to the Provost Marshal's office. He received only non-judicial punishment here. Everyone who was told of the circumstances broke up with laughter. Nobody could be serious ... not even the 1SG.
A true ASA War Story. TINS quality ... forgive the pun.

PS:
When sober, Willie was a polite fellow. His work ethic belied his off-duty antics. To all accounts, he was a very good analyst.
As for Riley ... I exchanged a couple of e-mails with him a few years back. He's become a Man of God ... a chaplain for the California Department of Corrections.
Fitting, somehow.