Have been exploring my family roots via the Ancestry dot Com site.

To date, this is what I've discovered:


While visiting the Traveling Wall, I found Bill Stewart's
name and made a rubbing. Bill was a friend and mentor
when I was a nug 98C at the 8th RRFS. Bill, along with six or
seven other 8th RRFS personnel, died when the C-130 they were riding
in flew into a mountainside while trying to land at Da Nang AFB.
It was on October 8th 1967, in the rainy season, and I remember
the day as full of fog and rain. 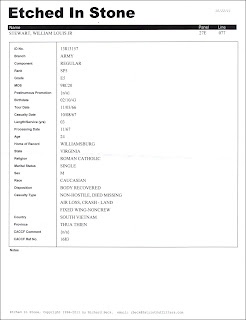 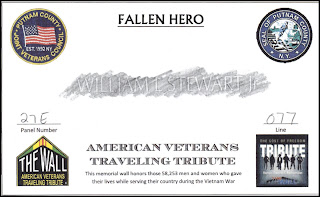 Bill Stewart was on his way home. He'd done his year, his 365 days. Most of the others from the 8th were on their way home too. That's the irony of this tragic crash.
(It was an article of faith that the 'Nam was not done with you until you had your boots on the ground at home... and sometimes not even then.)