A day for remembering.

Was stationed in Japan for two years...
at the 14th U.S. Army Security Agency Field Station, Hakata, Japan.
It was near the city of Fukuoka, on the southern island of Kyushu.

I traveled some while there... paid a visit to Nagasaki.
Went to the "Ground Zero" monument, actually.
I stood there a long while, looking, watching, thinking.

I wondered why, since I had Japanese friends,
that I felt nothing while standing there, at a monument to
their defeat and our own (now) perceived barbarity.

I decided that it was due to my own understanding of history.
In 1945, the Japs were the barbarians, while we were the
"Knights In Shining Armor."
We'd prevailed, survived to lop off the head of the great
dragon that had been a rampant Nippon.

It also mattered that my step-father had been a U.S. Marine and
fought at the battle for Okinawa. While he never spoke much
about his war years, he did once say he felt that Harry Truman
most probably saved his life by dropping The Bomb.
He had been scheduled to be part of the invasion force for Japan.

After Okinawa, the ordinary foot soldier and marine had no
illusions about the cost of that upcoming fight.


My step-father, Don Vermilye (far left), on pass in Honolulu
prior to shipping out to Okinawa. 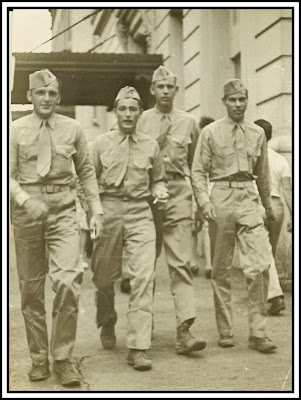 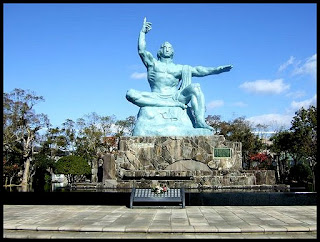 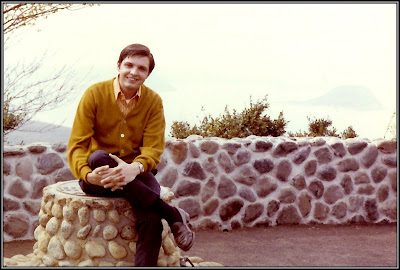 PS:
I don't have many pictures from my tour in Japan... this is the only one I have loaded in my computer.

PPS:
I'm also reminded that life has a way of just plodding on.
Today may have been "Pearl Harbor Day" (70 years on) but today was also the day for my wife's second podiatry appointment.

ALSO:
Another Japan memory surfaced... visiting the home of a bartender friend... sitting around the kotatsu (table) eating squid, drinking beer... his grandmother telling me that the one thing she had feared most during the war was the "Bee Nijuu-Ku" (the B-29 Bomber).
I had no reply for her.