Meanwhile,
back at the Property Book Office ...


I arrived at FSB in March 1973.
Since my TS clearance hadn't yet been re-approved,
I was put to work at the Site 3 Property Book Office.
There was a warrant officer as OIC (can't remember
his name), an E-6 NCOIC (can't remember his name
either) and two enlisted warehousemen/drivers.
I do remember their names ...
Ray Pike and Paul Cole.
On a summer day that year, with nothing much going on,
we three decided to paint parking lines on the asphalt in front
of the loading dock. This was to make it easier to back a truck
into the space in front of the loading doors. We also marked out
reserved parking spots for the OIC and NCOIC, loading spots
for the two trucks and an X-striped no-parking area.
I posted this picture because those yellow paint lines can
still be seen here ... some 40 years later.
Cool.
(On a slow Friday afternoon, we'd wash the trucks and then
soak up some sun, sitting in folding chairs to the right of the
loading door while we awaited the end of the duty week.
There was no overhang back then and the late afternoon sun
shone directly onto the loading dock.)
(Photo shamelessly borrowed from Thomas Kemnitz). 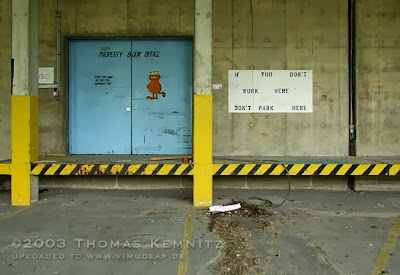 Things remembered ... Ray Pike was memorable for driving from
Berlin to Spain (and maybe Morocco) and back in a bright red Mini-Cooper.
(This was back when they were tiny little cars with 12" wheels.)

I remember, also, when Paul Cole acted as the roadie for my band, "Transom," when we played our one and only downtown gig at Club Sloopy ... October 1973. 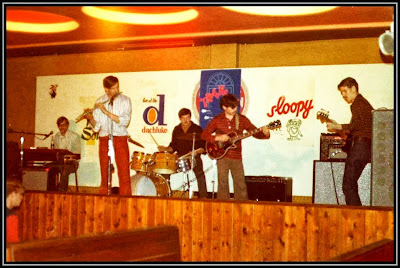 Link to a recording of "Transom" performing at the Berlin Funkaustellung - September,1973:
https://soundcloud.com/snuffyny/rat-in-a-maze