ASA War Story -
1967
8th Radio Research Field Station,
Phu Bai, Thua Thien Province, Vietnam (Republic of)
Late summer:
Had been there a short while . . . perhaps 2 months. Was beginning to feel confined. We weren't allowed off the combat base. A ration convoy was being put together. I volunteered . . . wanted off post, badly. We had to be fully armed, but nobody said with what. I decided to forego taking the -14 and borrowed a .45 pistol from a machine-gunner friend. (Note: I had no idea how to operate said pistol. How fucking stupid was I??) We rolled out the main gate early one morning and turned north, towards the city of Hue. After traveling for about 30 minutes the truck I was riding in began back-firing and jerking and then stopped. The convoy kept going, per SOP, and we three found ourselves stuck on Highway 1, in an area away from any villages or U.S. forces. Me, armed with a pistol that I'd never even held before and two other nervous ASA'ers armed with their M-14s and 80 rounds each. After an eternity of time, along came the maintenance trail. They fiddled with our engine and after a time we were rolling again. We wended our way through paddys, villages and farm country until we reached the shore of a large body of brackish water. On the shore was a small village and our trucks were all parked there, on the beach. Out on the water, about a quarter mile,  was a US Navy self-propelled reefer barge. A "Mike Boat" (landing craft) was ferrying the trucks, one at a time, out to the barge, where they were loaded then returned to shore.

Since my truck was now last in line, I had a goodly bit of time to explore. I wandered through the village, taking in all the strangeness and tranquility and poverty. A little girl caught my eye. My guess is that she was about 10 - 12 years old. She waved me over, then offered me a slice of watermelon. It was a brutal hot day. I accepted. I was struck near dumb. Here was this child who had nothing, offering me something . . . for nothing . . . out of compassion. The melon went down smooth. Tried to talk with her but she spoke no English and I was mono-linguistic. I was then called over and ordered to go out with the next Mike Boat to facilitate the transfer of foodstuff. It was getting late. Once aboard the barge we labored long and hard, shifting crates of vegetables (To include a deck cargo of heat-rotted potatoes that the navy insisted we take because they were ours and "sorry, there was no room in the cooler for them, and we know we're three weeks overdue but regs are regs . . . and there's a fuckin' war going on!") The hardest part was moving the frozen meats up from out of the freezer compartment. I stood on a crate and passed each piece up, through the open hatch, to someone there, waiting for it. This went on for about three-quarters of an hour. It would have been a good workout for a weight lifter in a gym. I was whipped afterwards. Went up on deck and lit a cigarette. Local kids, in round caracle boats, had swarmed the barge and were yelling (begging) to the GIs on board. Somebody had opened a crate of oranges and had begun tossing them into the water to watch the kids fight over the fruit. Some of the fights were downright vicious. Guys were taking bets on which kid would get to the orange first. I found this to be repugnant behavior on the part of well-fed Americans. 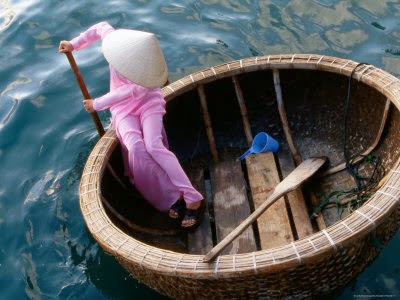 Soon, the transfer of foodstuff was complete. We formed convoy on the beach and prepared to drive off. I was, once again, in the back of a truck. This one happened to have a couple crates of oranges on board. As we passed through the village, I spied the little girl who'd offered me the melon slice. I waved at her, then heaved a crate of oranges out towards her and yelled "Thanks." She waved back . . . that's the last I saw of her.

I've remembered that little girl through the intervening years. Wondered if she survived, grew up, got married, raised a family.
I dearly hope so . . . hope her life was peaceful and uncomplicated.