Split personalities ...
people in the National Guard seemed
to all be afflicted with this malady.
I joined the Guard in 1990.
I chose the local battery of the
192nd Field Artillery ...
became an OJT 13B, cannon-cocker.

My very first drill week-end,
I stood on the drill floor in my brand new,
unfaded, BDU uniform looking about me.
What I saw was a very mixed bag of men,
some of whom I had to wonder at.
They seemed to be trying to provoke an
"Unfit For Military Duty" discharge.
What ran through my mind, actually,
was something a former First Sergeant
might have said:

Anyway ... that was my thinking for the first few
months of my enlistment.
Slackers.
Came my first trip to Annual Training and in the
field, my thoughts were changed.
One such "slacker" was our assist. gunner.
He was a walking laundry-bag ... always wrinkled.
On the gun ... he was Wyatt Earp.
He was fast and smooth, knew exactly what he was doing
and ... did I mention that he was fast. During one
FFE exercise, with the guns all firing as fast as they
could, I watched him, mesmerized by his repetitive
actions.
We were heavy artillery, firing the M-114,
155mm gun. The A/Gunner removed the firing lock,
opened the breech block, inspected the breech (for
burning residue), swapped primers in the firing lock,
inspected the breech again after the projectile and
propellant have been loaded, closed the breech block,
inserted the firing lock, attached the lanyard,
waited for the order to fire, pulled the lanyard ...
BOOM! ... a sudden, soft punch to the gut ...
then started the process all over again ... at top
speed. It was something to see ... and it changed
my opinion of all the rag-bag soldiers in the unit.

They didn't do this for the spit & polish army ...
they were in it for the "dirty-shirt soldier" army.
Indeed ... so was I. Loved field duty with the Guard.
Wet and cold, hot and dry ... crappy chow or MRE's ...
all was worth it when you recieved a "Go" rating at the
end of a field exercise.

Breech end of the M-114 Howitzer 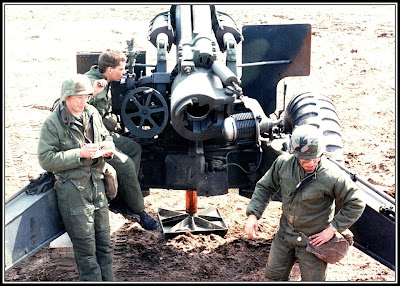