A beautiful day, today.
According to the TV, it's to be the last day of summer weather this year.

The way things were:

There once was an airline... Eastern.
They were innovators. They began a shuttle run that flew
from Boston to Philadelphia to Washington, DC.
Then back around again. It ran several times a day.
(Somewhat like a bus company.)
Seating was on a first-come-first-served basis and the
fares were low.
That's what I want to remember here... the fares.
This was 1966/67. All airlines offered a "Military-Standby Fare" at the time. It
was half the price of the normal fare... if the service member travelled
in uniform.
My very first-ever flight was on that Eastern shuttle, from Boston
to Philadelphia... on the Wednesday evening before Thanksgiving in '66.
My standby cost... $15.00. This was a BIG DEAL for me.
My take-home pay was $91.00 a month and even though room and
board were taken care of, there were always other expenses and
small costs to budget for. I used the Eastern Shuttle two or three more times
before I departed Fort Devens in June of 1967. Never did need to fly it again.

Eastern is gone now... along with Trans World, Braniff and Pan American.
I spent a lot of time flying here and there while in the army and the sight
of aircraft in these familiar company liveries, while in foreign lands, was always a quiet comfort to me.
I flew Braniff on the first leg of my journey to Viet Nam.
The equipment was a Boeing 707... painted a bright yellow... it came with a full
complement of stewardesses, who managed to do the "Braniff Strip" during the
long, long haul across the Pacific to the Phillipines. The Braniff Strip was a
marketing ploy, where the stews would greet the boarding passengers dressed
in a colorful, multi-layered uniform... and then remove layers as the flight progressed.
I seem to recall that by the time we reached Clark AFB, they were down to a beret,
a mini-skirted shift and horizontal-striped stockings... reminding me, very much, of characters from a Dr. Seuss story.

Flew TWA once only... out of Viet Nam. It, too, was a 707. As the plane rolled down the runway on the take-off run, the Fifth Dimension song, "Up Up And Away," began to play. It was happenstance... the song was one of hundreds on a continuous-loop tape.
This flight stopped at Wake Island... to pick up a couple of transfering military personnell. It was night. The runway was short. Upon leaving, the plane taxied to the end of the tarmac and the throttles were firewalled even as we made the turn onto the active runway. We were carrying a full load of fuel and a full load of passengers. We used the entire length of the runway and seemed to just fly off the end... out, over the ocean where we began a slow climb to altitude.
Flew Pan-Am often. They were the American-owned airline of choice in cold-war Berlin.
There were only three airlines permitted access, per treaty, to the West Berlin air space: Pan American, British Airways, Air France.

I don't fly anymore.
No need...
Besides, the security procedures have made it an unattractive mode of travel nowadays.
My very last flight was on a USAF C-9, Nightingale (Douglas DC-9) in the summer of '94. I was traveling from West Point, NY to Andrews AFB in VA.
I was to be seen by a Medical Evaluation Board at Walter Reed Army Hospital in DC, following my heart attack. A medic from the Keller Army Hospital, at West Point, dropped me off on the tarmac at the deserted military terminal of Stewart Airport... I was all alone. I stood there with my bag for approximately 20 minutes... then, I watched as a C-9 finally landed and taxied all the way back to where I was standing.
It stopped not ten feet from me. With the engines still running, a door near the front of the aircraft opened, a staircase was lowered and a crew member descended, asked me my name, picked up my bag and asked me to board. It was the nicest that I'd ever been treated while flying military.

Inside were stretcher racks (with maybe six non-ambulatory patients), and quite a few comfortable, backward-facing seats... mostly filled. I was seated next to a marine who was on his way home on leave... seems that this Nightingale flew a twice-weekly circuit, ferrying patients between the two DC-area medical complexes (Walter Reed and Bethesda) and the various home units located in the eastern half of the country. Empty seats were allotted to Active Duty personnell, free, on a space-available basis. This marine was on his way home from Charlston Navy Base in South Carolina... he just had to put up with a six or seven hour tour of the eastern US first. The stop before mine had been in Ohio... after picking me up, we then landed in Philadelphia... and from there, it was on to Andrews. (Gotta tell you though, the in-flight meal was superb... steak and potatoes and green beans.) 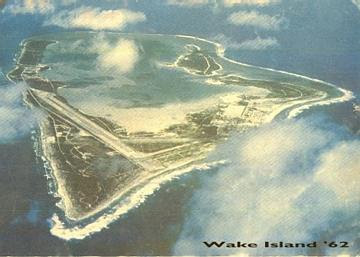 PS:
About that landing on Wake... been thinking on that... and cannot swear on which flight I was on. I did land on Wake Island once... just cannot remember exactly when.
I made several trans-Pacific flights in the late '60s / early '70s time frame.

1. Travis AFB, CA to Clark AFB, Manila (via Ancorage, AK) Chartered Braniff
Boeing 707.
2. Clark AFB, Manila to Pleiku AFB, RVN. Chartered Air America Boeing 727.
3. Bien Hoa AFB, RVN to Travis AFB (via Hickam AFB, Honolulu) Chartered TWA
Boeing 707.
4. San Francisco Int'l Airport to Tokyo Int'l (via Ancorage, AK) Pan American
Boeing 747.
5. Tachikawa AFB, Tokyo to Hickam AFB, Honolulu. Chartered civilian DC-8.
6. Hickam AFB to Tachikawa AFB. USAF C-141.
7. Tachikawa AFB to Travis AFB, CA. Chartered civilian DC-8. ( I think that this
flight may be the one that landed at Wake.)
8. San Francisco Int'l Airport to Honolulu Int'l Airport. Western Boeing 737.
9. Honolulu Int'l Airport to Tokyo Int'l Airport. Northwest Orient DC-8.
10. Tachikawa AFB to Travis AFB. Chartered United Boeing 707.
(Don't remember much about this last flight. I was sick... a combination of a nasty,
nasty sunburn and several inoculations required by international law. I slept all the way home. Don't know if we stopped anywhere along the way. The plane was about half full. (It had been an unscheduled departure and only the people actually in the waiting room were boarded.) The stewardess was nice enought to remove the arm rests and give me three seats across to myself.
Strange thing... I left Japan at 11:00 AM, 6 July, 1971.
I arrived in California at 10:00 AM, 6 July, 1971.)

Memories become dimmer with the passage of time... the Wake Island story's true... just not sure of exactly when it happened.